As early as the 14th century, about St. Ivo it was said:

St. Ives was from the land of beef,
A lawyer, and not a thief;
A stretch on popular belief. 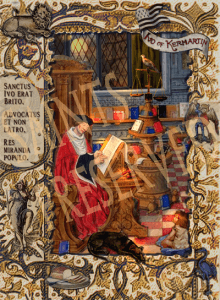 The son of Lord Helori and Azo du Kenquis, Ivo, (or Ives, Ybus, Yvo, Ivo of Helory) was born in Kermartin (near Tréguier), Brittany, October 17, 1253.  At age 14, Ivo attended the University of Paris, where he graduated in law, and later studied civil law at Orléans under the famous jurist Peter de la Chapelle. In less than 10 years he achieved renown for his pro­fi­cien­cy in phi­los­o­phy, theology, and canon law. He then returned to Brittany where he was appointed judge of the Ecclesiastical Court by the Archdeacon of Rennes. He also received minor orders.

He continued to study the scrip­tures, and it is believed that he joined the Franciscan Tertiaries sometime later at Guingamp. He is said to have dispensed justice with such care and con­sid­er­a­tion that even the losing side held him in high esteem.

Ivo’s pro bono defense of the indigent earned him the title “Advocate of the Poor.” In addition to presiding over his own court, he pleaded for the helpless in other courts, paying their expenses and visiting them in prison. It is said he refused the customary gifts (bribes) from litigants and endeav­ored to reconcile dif­fer­ences out of court.

Eventually, Ivo was elected as official to Alan de Bruc, the bishop of Tréguier. In this office he gained yet more respect and notoriety when he resisted the taxation imposed by the monarchy upon the Church, which he con­sid­ered unjust.

Apparently he also built a hospital, and dis­trib­uted the harvest from his own land to the poor. He was known to give to beggars not only his clothing, but even his bed–while he slept on the doorstep.

In 1285, having been ordained, he was appointed to the parish of Tredrez and eight years later to Louannec, where he died on May 19, 1303.
He was buried in Tréguier, and was canonized in 1347 by Clement VI;
his feast is observed on May 19.

We have added some links to the above biography of St. Ivo to provide addi­tion­al infor­ma­tion outside our site. Below are few more that we found inter­est­ing. Please submit any that you think should be included here.

The Ivo Foundation carries on the Tradition of St. Ivo:

“The evolution of a society where access to justice to the poor and vul­ner­a­ble people espe­cial­ly women and Children in prison and effective imple­men­ta­tion of the Child Rights Act within the prison system is enhanced...”

“Provision of support for prompt access to justice to Awaiting Trial Persons, foster care arrange­ment to children of impris­oned inmates and empow­er­ment of the less priv­i­leged in the Society.” 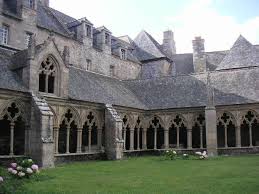 Pilgrimages to Tréguier: Attorneys can follow in Ivo’s footsteps Our St. Ivo is available in many media — sculpture, icon, jewelry, greeting cards, prints and more In PatriArts Gallery. Just click here to go there.

A free high-quality pdf, just click to preview and print. 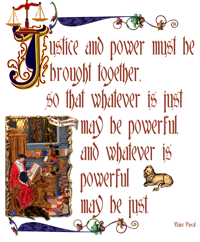