Gertrude of Nivelles was a great friend and hostess to many of the Irish missionaries. She also shares a feast day with St. Patrick. (Belgium is considered a Celtic country*)

We’ve given Gertrude her own blog. Just click to go there for all kinds of interesting information, as well as a prayer circle. 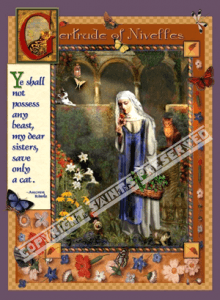 *Beginning in 57 BC, Julius Caesar extended the power of Rome into the region of Europe that is now Belgium. The people he encoun­tered there were the Belgae, one of the various Celtic tribes of early Gaul, and the Romans dubbed their new province Gallia Belgica. ‑Source: Belgium History