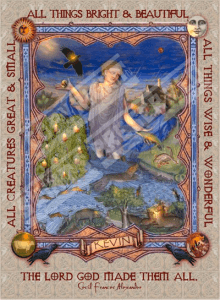 His mother, Caemell (or Coenhella), was said to have had no labor pains and was attended by 12 angels with golden lamps who gave him his name. The entire family was pious, with several saints among them. Kevin’s father was said to have given up his inher­i­tance in order to live a more honest, simple life. While they resided in Leinster no frost or snow ever appeared and there was always enough grass for the cattle to graze upon. A white cow came to their door every
morning to give milk.

Kevin left home at about age seven to study at the monastery of Kilnamanagh, County Dublin. After his ordi­na­tion, he chose to lead a solitary life in the Wicklow Mountains at Glendalough.
He lived in a cave and ate what food he could gather,  sleeping on a stone slab with a rock for a pillow. Eventually word of his holiness spread and Kevin had to give up  his solitude in order to accom­mo­date the many people who wanted to join him. He estab­lished a monastery at Glendalough, which became a principle pil­grim­age site.

Kevin seemed have a special rela­tion­ship with nature and animals. He often stood in the cold lake, praying in the tra­di­tion­al way with his arms out­stretched, and reciting psalms. An otter would bring him enough salmon to feed the community and once retrieved his psalter which had fallen in the water. The book was mirac­u­lous­ly undamaged.

Another time, a crow flew by and laid an egg in his hand. He held it there until it hatched.  Yet another time a wild boar ran to him for pro­tec­tion and when the hunting dogs saw it with Kevin, they lay at his feet.

He cured the pagan King O’Tool’s elderly pet goose, enabling it to fly again. As a reward the king gave him all the land the goose flew over, which he used to  found the monastery of Glendalough.

There, a young student suffering from epilepsy received a vision that he would be cured by eating an apple. It was out of season,  so Kevin asked a willow to produce apples  and 20 yellow apples appeared on the tree.

In his humility, even though he was an abbot, Kevin chose to remain a priest, rather than become a bishop. It is thought that he was over 120 years old when he died in about 618, on June 3.  Glendalough remains a place of pil­grim­age, with many miracles attrib­uted to St. Kevin.

If you have any inter­est­ing links con­cern­ing St. Kevin,please let us know. 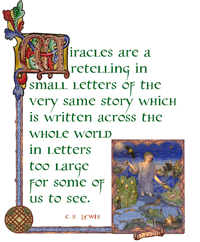 We have many St. Kevin pieces in PatriArts Gallery