St. Brendan the Navigator (or Brandan or Brenainn), was born in what is now County Kerry, Ireland, about 486 A.D. He was a great traveler and founder of churches and monasteries.
According to famous medieval legend, Brendan and a band of intrepid monks embarked in a small leather boat upon a long and fantastic voyage around the Atlantic in search of “Terra Repromissionis,” or The Promised Land. Brendan was over 80 years old at the start. The Navigatio Brendani, which dates from the 11th century, contains the earliest surviving version of this story and became a multi-language “best-seller” in its time.
Their many adven­tures included?being blown onto an island where they were met by a dog who led them to prepared meals, but no humans.Their next landfall was an island of sheep with streams of trout. Then they sailed to one that was com­plete­ly barren. As they began to build a fire and make camp, the island began to move. The terrified monks ran back to their boat and pushed off just as the “island” swim away with their fire still burning on its back. They had made camp on Jaconious, an enormous whale who kindly forgave them and came to their aid several times through­out the voyage.
On another island, thousands of birds of all types joined the monks in their prayers. It was a little bird that told Brendan the voyage would last not the 40 days he had planned, but seven years.
Shortly after their return, Brendan died, at approx­i­mate­ly age 93 at Annaghdown, Co. Galway.
St. Brendan’s Island became a standard feature on maps for the next mil­len­ni­um (finally removed as no one was ever able to find it). 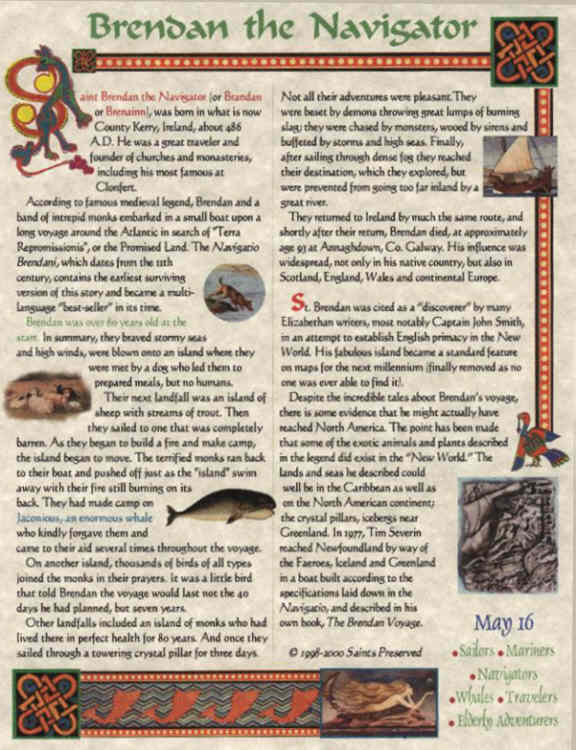 Despite the incred­i­ble tales about Brendan’s voyage, there is some evidence that he might actually have reached North America. The point has been made that some of the exotic animals and plants and place described in the legend did exist in the “New World.” The lands and seas he described could well be in the Caribbean as well as on the North American continent; the crystal pillars, icebergs near Greenland In 1977, adven­tur­er Tim Severin reached Newfoundland in a boat built according to the spec­i­fi­ca­tions laid down in the Navigatio.

Biography of Brendan from Wikipedia

Brendan the Navigator — a highly infor­ma­tive site with much his­tor­i­cal infor­ma­tion and images.

Info on Brendan and his voyage from Catholic Encyclopedia

The Voyage of Bran, Son of Febal set to music, from Lost Civilizations​.net.

Clonfert Cathedral, also known as St. Brendan’s Cathedral, is a 12th-century Hiberno-Romanesque structure on the site of Saint Brendan’s 6th-century monastery in Clonfert, Ireland. Although the building currently serves a Church of Ireland con­gre­ga­tion, Irish Protestants and Catholics share interest in pre­serv­ing this relic of their common cultural heritage.

Photo of Monks’ Early Monastic Churches from Ask About Ireland

Elderhostel, Inc. (now called Road Scholar) is a not-for-profit orga­ni­za­tion with 25 years of expe­ri­ence providing high-quality, afford­able, edu­ca­tion­al adven­tures for adults who are 55 and older. These short-term edu­ca­tion­al programs are a fun and exciting way for you to share new ideas, explore new places and make new friends.

SAINT BRENDÁN THE NAVIGATOR Church of the Culdees: ” A rebirth in and for modern America
of the Orthodox Catholic Church of the Celtic and Anglo-Saxon peoples prior to 1066” Located in Springfield Oregon

Scientists group all whales into two cat­e­gories: toothed whales and baleen whales. As the names suggest, one type of whale has teeth. The other type has something very different, called baleen, instead of teeth....lots of very inter­est­ing info here: Understanding Whale Teeth. (and thanks to Danielle in Ms. McDowell’s fifth grade class for sharing her discovery!)

The Marine Mammal Center’s sole purpose: to save marine mammals
and their envi­ron­ment before it’s too late.

The Ocean Alliance is dedicated to the con­ser­va­tion of whales and their ocean envi­ron­ment through research and education. The Voyage of the Odyssey, embarked February 2000, taking the world with it via the Internet so that everyone gets to share in the adventure and learn new things about the seas at the same moment the crew is learning about them (both audio and video).

And our gift to you: this “Connections Quotation” printable pdf, just click to view/​get it 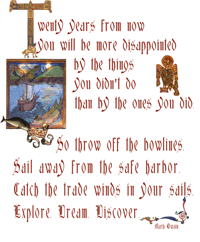 Please see PatriArts Gallery for  our selection of  St. Brendan art, chaplets, jewelry and much more. 
Please send us your con­nec­tions! (Or corrections)