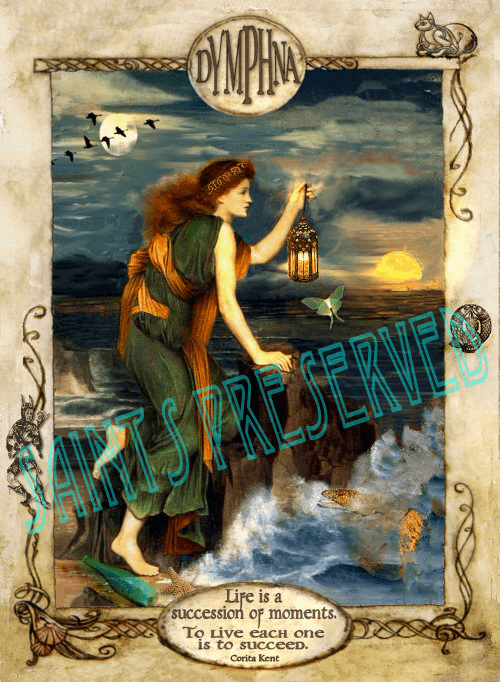 St. Dymphna (or Dympna or Dimpna) is often regarded as an Irish saint, but “Celtic” would be more accurate, as she practiced her good works in Belgium and is known as  Dymphna of Gheel (or Geel).

According to tradition, she was born in the 7th century to a pagan Irish king and a Christian princess. Her mother, who died when Dymphna was very young, had secured a promise from the king that their daughter would be raised as a Christian.  The king, infat­u­at­ed with his wife’s great beauty, agreed.

Dymphna not only grew into a devout and beautiful young woman. Unfortunately, her resem­blance to her dead mother even­tu­al­ly drove her father to madness, resulting in his trying to take Dymphna as his wife. Her confessor, Gerebernus (later a saint himself), advised her to flee as far away as possible and said he would go with her. So, along with the court jester and his wife, they sailed to Antwerp, Belgium. They then traveled until they reached a small oratory dedicated to Saint Martin on the site of the present-day town of Gheel. They decided to settle there, and Dymphna soon earned a rep­u­ta­tion for holiness because of her great devotion to the poor and suffering.

Meanwhile, Dympna’s father was furiously pursuing her. His spies finally traced the group’s where­abouts, perhaps by their use of foreign coins (including those they’d given to the poor). The king tried to persuade her to return to Ireland, but when she refused, he commanded his servants to slay her com­pan­ions, while he himself struck off the head of his daughter.

In the early 13th century, the bones of an unknown man and woman were dis­cov­ered at Gheel. The name Dympna was found on a brick with the two ancient, marble coffins. It was deter­mined that this was the site of her martyrdom and it soon became known for its mirac­u­lous healings of nervous diseases and mental disorders.  Mentally afflicted persons were brought to this shrine by relatives and friends, many from a far distance. Gradually patients were cared-for in the homes of local families. From this practice evolved a world-renowned insti­tu­tion where most patients stay with families and live rel­a­tive­ly normal lives.

Her feast day is cel­e­brat­ed in Ireland and Belgium. In the United States, there is a national shrine in Massillon, Ohio.

To read about the legends, beliefs and tra­di­tions and con­nec­tions sur­round­ing St. Dymphna, follow the links below.

The National Shrine of St. Dymphna is located on the grounds of the Heartland Behavioral Healthcare (Massillon, Ohio) and was the first Church in America dedicated in her honor.

Prayers to St. Dymphna from the Franciscans

Please note: These links may not be up-to-date. Feel free to let us know about any that need adding, removing or changing. 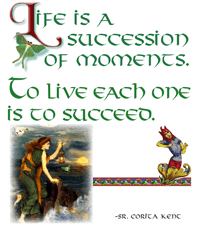 Our St. Dymphna is available in many media — sculpture, icon, jewelry, greeting cards, prints and more In PatriArts Gallery. Just click here to go there.