Brian Bórumha mac Cennétig (known as Brian Boru in English) was for a brief, shining moment—like the legendary King Arthur—High King of a unified land and, like Arthur, his life story is cloaked in myth and mist, with few facts. But Brian was very real. Born around 940 AD near Killaloe (Kincora), now County Clare, his father was Cennétig mac Lorcáin, King of Thomond and his mother was Bé Binn Ingen Murchada, daughter of the King of West Connacht.

Throughout his childhood, the Irish were living in constant fear of Viking invasions. When Brian was still a young boy, the dreaded Norsemen invaded while he and his brother Mahon were out hunting.They returned to discover the castle burned and nearly everyone killed, including their mother. This horrific expe­ri­ence affected him greatly and he responded by rebelling against authority, focusing only on how to avenge his family. He was even­tu­al­ly sent away to a monastery school where he channeled his energies into learning about the Vikings. He also learned to love learning itself and became adept at Latin and Greek. Through studying the history of Ireland, Brian realized that virtually every neigh­bor­ly dispute turned into a war.

He decided that the Irish should stop fighting among them­selves and unite against their common enemy, the Norsemen. Mahon had by now succeeded to the throne of Munster, Cashel, (Tipperary). He joined forces with Brian and they defeated the Limerick Vikings, bringing a long period of peace to southern Ireland.

But after a decade, the Norsemen regrouped with a vengeance, assas­si­nat­ing Mahon in the process. Brian succeeded him to the throne, carrying in his heart a rekindled hatred. Even so, King Brian’s influence continued to grow as he rebuilt churches and promoted diplomacy and harmony among the tribes. His pop­u­lar­i­ty, power and influence grew so strong that King Malachy in the north relin­quished his crown to Brian, making him Ard Ri of Tara (High King of Ireland) in 1002. Relations with the Norse did not improve, however, and Brian’s rivals were many. Maelmordha, King of Leinster, revolted and recruited the Vikings who had long been living in Ireland. They formed a coalition of Brian’s Irish enemies, as well as forces from the Hebrides, the Orkneys, and Norse countries.

On Good Friday, 1014, Brian’s warriors defeated the allies at Clontarf, near Dublin. Sadly, soon afterward he was assas­si­nat­ed in his own tent. Brian’s victory broke the Norse power in Ireland forever, but without his unifying influence, Ireland soon fell back into infight­ing. Known as the prog­en­i­tor of the Clan O’Brien, his legacy is a reminder of the strength of a unified Ireland. The national emblem of the harp is named after him (on display at Trinity College). The evocative tra­di­tion­al tune, “Brian Boru’s March” is played every­where on every­thing from pipes to harp.

Brian Boru — obviously no saint — came to be one of my Anachrons™ because one of my patrons had purchased a St. Brendan for her new grandson (named Brendan). A few years later, she had a grandson named Brian and she com­mis­sioned a Brian Boru. I was entranced with both his legend and his “March”...whenever I play it, I have to keep playing it for awhile...and then it gets stuck in my ear for awhile longer!

(See/​listen to the video of Sir James Galway’s flute solo below.)

The Green Man’s Harp is dedicated to  the harp and music therapy. Duncan Saunders also offers free harp music to listen to on his site. 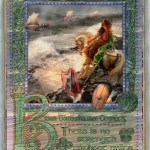 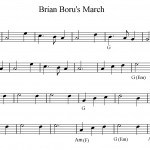 < click for the music from Brian Boru from the Celtic Harper