My grandfather died the year before I was born. By all accounts, he was a remarkable man. He graduated first in his class at Unversity of Cincinnati Medical College, played on the varsity football team and travelled there from his family’s farm on a motorcycle he built himself. He met my grandmother when she was a student nurse. (Read more about her, and my mother, in the Hildegarden).
As a country doctor he visited his patients all around Butler County, OH in a model T.

When the Depression came along, his patients could often only afford to pay him with the things they could grow (chickens, fruit,etc.).  His family grew to seven daughters, and it was his beekeeping and honey production that helped pay the bills. 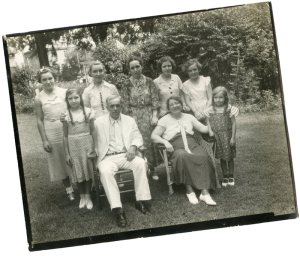 He proclaimed the therapeutic virtues of keeping bees and had such luminaries as William Howard Taft and Admiral Byrd come to him for advice and instructions. Click on the image to see an illustration for “Dr. Hutzelman’s Solution” [pdf], something my grandfather (a country doctor) developed and marketed in order to help support his large family during the Great Depression. There’s also interesting claims [pdf], if you’re really interested. PS: I’m grateful I did not inherit his artistic ability! (But I wonder what happened with that patent….hmmmm….)