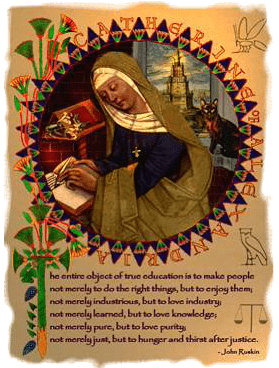 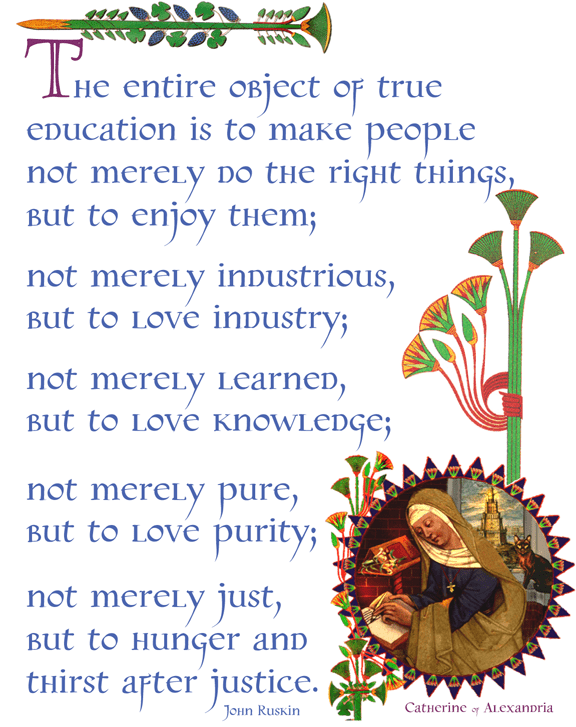 According to popular tradition, Catherine was born around 300 AD to a prominent family in Alexandria, Egypt—a great cosmopolitan center. As a young child, Catherine showed a love of learning and was permitted to pursue it. In the course of her extensive studies she discovered Christianity and subsequently had a vision which persuaded her to embrace that faith—despite the fact that it was a very dangerous thing to do.

At this time, the Emperor Maxentius (or perhaps his father, Maximian), was one of several rival emperors who were vying for power. They all viewed the growing Christian faith as a threat and took extreme measures to crush it.

The courageous young Catherine confronted the emperor, offering to debate his pagan philosophers. Many were converted by her arguments±and were promptly put to death. Catherine was put into prison.

While Maxentius was away, his wife visited Catherine out of curiosity and was quickly converted, along with two hundred of his soldiers. Upon his return, he had them all executed.

Catherine was sentenced to be tortured and killed on a spiked wheel, but as soon as she touched it, it fell apart. She was then beheaded and angels came and whisked her body away to Mount Sinai, where centuries later, a church and monastery were named in her honor.

As with most of the early saints, there is very little factual evidence about Catherine’s life, and it is considered to be mostly legendary. She became extremely popular in the Middle Ages, in both the East and West. Joan of Arc named her as one of her advisors and she is considered one of the Fourteen Holy Helpers. Her reputed learning and wisdom led to her patronage of philosophers, librarians, teachers, archivists, and scholars; her debating and persuasive language skills to her patronage of lawyers. Because of the wheel associated with her torture, those who work with them, including potters, spinners and millers adopted her.

There are many variations, in many languages, of her name, including Katherine, Catharine, Caitlin, Kathleen, Katrina, Yekaterina, Karen, Aikaterine,  to name a few.