Melangell was an Irish princess born in the late 6th century.
When she grew into a lovely, gentle, young woman, her parents arranged a royal marriage for her. However, she adamantly refused, wishing to pursue a calling to a life of solitude and prayer. Her father angrily insisted she marry. Since fighting against her father would have been impossible, Melangell’s only recourse was flight.

She eventually found her way to a spectacular wilderness at the head of the Tanant Valley in Northern Wales. Here she was able to lead a solitary life, subsisting on nuts and berries, sheltering in a cave, and sleeping on rock slab, with only small creatures for companions.

Fifteen years passed peacefully, then one day when Brochfael, Prince of Powys, was out hunting, his hounds startled a hare, and noisily pursued it into a dense thicket. Following them, he came across a beautiful woman±with the hare calmly lying in the folds of her garment, boldly facing its pursuers. The huge dogs were cowering in awe.

Once the prince recovered from his own amazement, he asked the woman, who was still serenely standing there, to explain herself. Upon hearing Melangell’s story, he was so overwhelmed by her strength of character, combined with her physical beauty, that he begged her to come away with him and be his wife.

Melangell refused, but Brochfael accepted her denial graciously, and even endowed her with a large piece of land.  However, he did request that, in exchange, she give up some of her solitude to found a monastery for others seeking peace and solitude. She agreed on the condition that the land be not only a refuge for people, but also for those gentle creatures, who like herself, had no recourse but to flee when threatened. (This spot later came to be called Pennant Melangell.)

During Melangell’s long life small creatures were spared from the hunt. This tradition continued for centuries, and even now it is said that if a hare is pursued by hounds and someone shouts after it, “God and Melangell be with thee,” it will escape. Hares are called wyn bach Melangell (Melangell’s little lambs) to this day.

Dismantled after the Reformation, the medieval church at Pennant Melangell was restored in 1992 and, though still quite remote, has attracted visitors and pilgrims from all over the world. The 12th century shrine’s stones, hewn with a unique blend of Romanesque and Celtic motifs, were built into the walls of the church and lych-gate. Melangell’s gwely, or bed, lies on the opposite side of the valley, a quarter of a mile south of the church.

Nearby are four ancient yew trees, perhaps 2,000 years old. The valley has been named a Celtic “Thin Place” (because heaven and earth appear very close to each other).

The hare was a sacred animal for Celts, symbolizing abundance, good fortune and prosperity. Also, the rabbit can run exceedly fast uphill in order to elude its enemies, thus it came to symbolize Christians’ fleeing earthly evil and ascending toward heaven. After her death,
St. Melangell became the patron saint of hares and small creatures as well as the natural environment.

Her Latin name is Monacella, and the following pun was ancient even when it was recorded in the church register in 1723:

(Melangell with a thousand angels
Triumphs over all the powers of evil.)

Her feast day is celebrated on May 27 in England and January 31 in Wales. She is also honored by the Eastern Church on May 17. 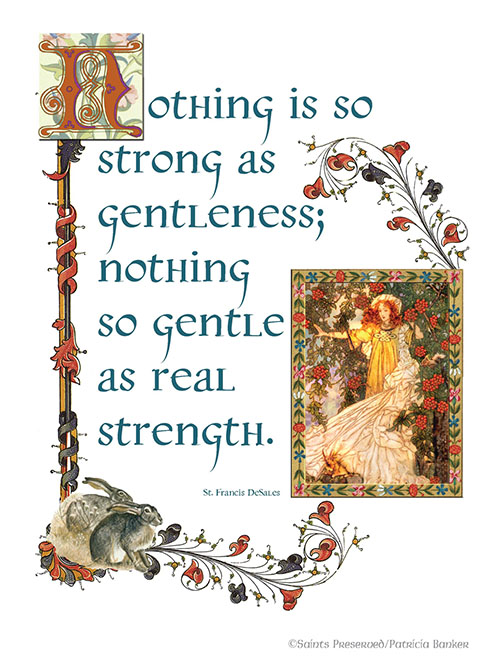 Most small mammals still live in the wild. Cute though they may be, many of them can, frankly, be a nuisance. The Humane Society of the United States has a great web site with resources for not only protecting "our wild neighbors," but protections from them.

(you'll also find a link to
grief counseling and a hotline)

Our original artwork depicting St. Melangell may be purchased in many media, including plaques, wearable art, greetings cards and more at patriarts.com.