St. Gobnait is the patron saint of bees and bee keepers. Ambrose and Valentine and Benedict also have that honor, but I find her much more interesting and worthy of the designation!

This site came about through the ever-expanding circle of connections (mandalas, if you will) I have made as a result of  creating my Anachron* of St. Gobnait. I have met, and continue to meet, the most remarkable people doing amazing things – simply because of our mutual appreciation, love and respect for the Honey Bee.

I hope that you will find these pages informative and inspiring. And please contact us regarding anything you would like to pass along and share regarding bees, bee-keepers, Irish nuns, etc.

Dedicated to my aunt Alice, “The Bee-Keeping Nurse” who was the inspiration for my St. Gobnait Anachron. 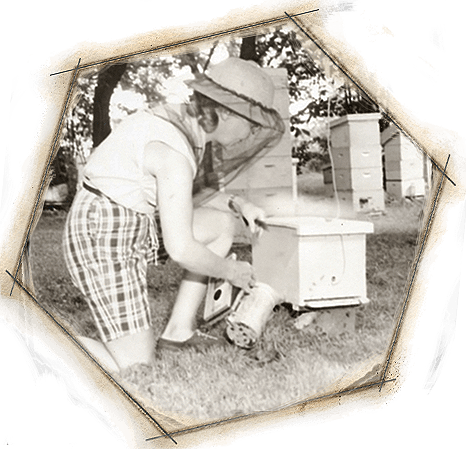 My Aunt Alice, c. 1960, seemed to have some pretty friendly bees. This was her usual attire in the bee yard. 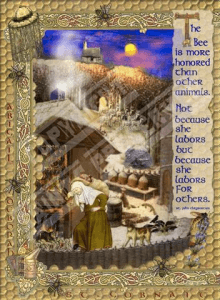 Gobnait (Gobnet, Gobhnet, Gobnaid, Gobnata, or Gobnatae), was born in County Clare, Ireland, sometime in the 5th or 6th century. Gobnait is Irish for Abigail (“Brings Joy”). As the patron saint of beekeepers, her name also has been anglicized as Deborah, meaning “Honey Bee.”

Tradition holds that Gobnait fled Clare in order to escape family feuding, settling on Inis Oírr (where there is an early medieval oratory, Cill Ghobnait, dedicated to her). Gobnait  was said to have been the only woman allowed on the island, but she didn’t linger. After a time, an angel appeared and told her that she was meant to spend the rest of her days (until her soul left her earthly body) elsewhere. She would know the right place because she would find nine white deer grazing there. So she left the island to journey through the southern coastal counties in search of the deer.
As a result of her quest, a number of places now bear her name – for instance, Kilgobnet or Cill Ghobnait in County Kerry and St Debora’s Well in County Limerick. She eventually came upon that mystical herd in Ballyvourney, County Cork, where she dedicated the remainder of her earthly life to pastoral work.

Her connection to honey bees is complex, beginning with the angel telling her to find her “resurrection place,” where the soul l 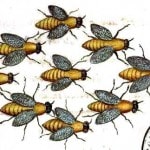 eaves the body.  In Celtic mythology, the soul was thought to depart the body as a bee or a butterfly. Bees have long held an important place in Irish culture, and ancient laws were called the Bech Bretha (“Bee Judgments”).
Honey is well-known for its curative properties, and Gobnait was renowned for her care of the sick. She is said to have had a strong relationship with bees and used honey in the treatment of illness and healing of wounds.
One of Gobnait’s attributed miracles has her rousting her bees from their hives in order to chase off evil-doers, including a band of cattle rustlers and a rich man who wanted to build a castle on Gobnait’s farm. Some accounts go even further, with the bees miraculously changing into soldiers and their hives transformed into bronze helmets. February 11 is a “Pattern Day” in the parishes of Dún Chaoin and in Baile Bhúirne, and is regarded as both holiday and holy day. In one tradition, a medieval wooden carving of Gobnait, about two feet high, kept in a church drawer during the year, is brought out. Parishioners bring a ribbon to ”measure” the statue. This ribbon is then taken home to use when special blessings are needed.

Our gift to you…a free high-quality card with a quote from John Chrysostom.
Just click on it to view/download.
(We also offer these cards as a boxed set in PatriArts Gallery.