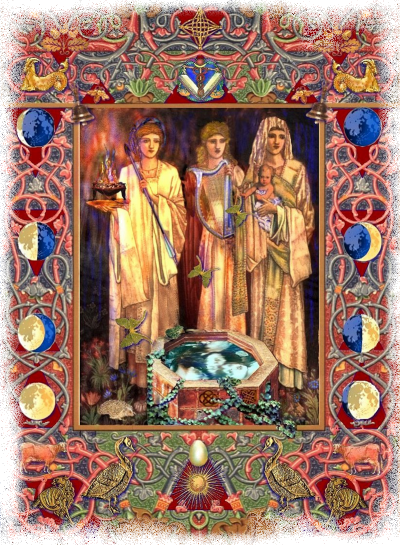 Our Brigid the Goddess Anachron

Brigid the Goddess is inextri­cably joined to Brigid the Saint by intricate Celtic knotwork woven from threads of history, legend, fact, fantasy and necessity. Venerated in Ireland, Wales, Britain, France and Spain, she is known as Brigid, Bridget, Brighid, Brighde, Brig, Bride, Brigit, Brid, Briggidda, Brigan, Brigindo, Brigandu. Her name means variously “The Exalted One, “Power,” and “Fiery Arrow of Power.” She is believed also to be the source of the Anglo goddess Brigantia and perhaps even earlier, a Sun Goddess.

Folklore and legends abound, with many varia­tions among them. Some say Brigid was actually three sisters: Poetess/Muse, Physician/Healer and Smith/Warrior.
The “three were one and one was three, united through the symbol of fire.” She was also know as Mother-Goddess of Fertility, the Hearth, Domestic Arts and, somewhat paradox­i­cally, the Martial Arts. She was identified with the changing moon and is closely connected with livestock and domes­ti­cated animals.

With the coming of Christianity, the powerful energy of the pagan goddess was trans­muted into Ireland’s much-loved saint, second only to Patrick himself.
-Alexander Carmichael

Just as the cool moon and the warm sun are her contra­dictory symbols, so are water and fire. In Ireland and Scotland, a number of wells, springs and rivers are named for Brigid (goddess or saint) and are believed to contain healing waters.

A shrine at Kildare was said to have a perpetual flame tended by 19 virgins (repre­senting the 19-year cycle of the Celtic “Great Year”). The festival of Imbolc (Oimelc or Imbolg), generally observed on February 1 (though other sources name February 2), means “ewe’s-milk” for the lambing season, and marks the tradi­tional beginning of spring.

In Scotland, Brigid was considered a great fritheir (seer or augerer). Thus the hedgehog is associated with Brigid, as a symbol of the foretelling of the coming of spring (evolving to Groundhog Day in the U.S.).

Another Scottish legend says that the Cailleach (Old Woman of Winter), is reborn as Bride (Young Maiden of Spring), who grows stronger each day along with the sun, waving her white wand to renew the earth with fertility and abundance.

Brigid is often said to be the daughter of Dagda, “The Good God.” She is credited with starting the practice of keening (caoine) the Irish mourning wail, when she cried for her slain son (some say her brother). The banshee (bean-sidhe), the spirit whose keening is said to presage a death is thought to be the spirit of Brigid.

Nineteenth-century folk historian Alexander Carmichael wrote: With the coming of Christianity, the powerful energy of the pagan goddess was trans­muted into Ireland’s much-loved saint, second only to Patrick himself.

Go to Brigid’s Links for much more info...

Listen to some Celtic music as you wander through the site.

(If you would like to feature your own music here, just let us know.)